#33 Auto-transcribe all your audio for free with Live Transcribe! 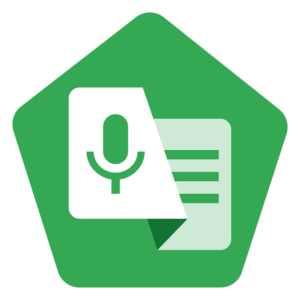 While writing my last blog post about Google Recorder 2.0, I stumbled upon a hack that can also be utilized for another app from Google, one that currently understands over 70 languages, not only English: It’s called “Live Transcribe & Sound Notifications” and is available for pretty much every Android device. Have you always been looking for a tool that transcribes your audio recordings but doesn’t require an expensive subscription? Here’s what I like to think is a very useful and simple trick for achieving this on an Android phone. You will need the following things:

Let’s say you have recorded some audio like an interview, a meeting, a vox pop, a voice-over for video or even a podcast on your smartphone (look here for some good audio recorder apps) and would like to have a text transcription of it. If you read this before making such a recording, do include a few seconds of silence before having someone talk in the recording and it’s also important that the recording is of good quality in terms of speech clarity, the reasons will become obvious soon.

Here’s how it works! 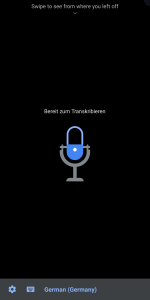 Open Live Transcribe and check the input language displayed in the bottom toolbar (if the toolbar isn’t there, just tap on the screen somewhere). It needs to be the same as the recording you want to have transcribed. If it’s a different one, tap on the gear icon and then on “More settings”. Choose the correct language. Unlike Google Recorder which I wrote about in my last article, Live Transcribe works with a vast number of languages, not only English. Also unlike Recorder however, Live Transcribe needs an active internet connection to transcribe, you can’t use it offline! If you are planning on pasting the transcription into a context with a white background later on, you should make sure that “Dark Theme” is disabled in Live Transcribe. Otherwise you will be pasting white text onto a white background. Leave the settings menu and check that Live Transcribe’s main screen says “Ready to transcribe” in the center. Now double-check that you are in a quiet environment, leave Live Transcribe and open the audio recording app. Locate the recording you want to have transcribed and start the playback of the file (do make sure the speaker volume is sufficient!), then quickly switch over to Live Transcribe. One way to do this is to use Android’s “Recent Apps” feature which can be accessed by tapping on the square icon in the 3-button navigation bar – some Android phone makers use a different icon, Samsung for instance now has three vertical lines instead of a square. If you are using gesture navigation, swipe up from the bottom and hold. But you can also just leave the audio recording app and open Live Transcribe again without going into recent apps. The recording will keep playing with Live Transcribe picking up the audio from the phone’s speaker(s) and doing its transcription thing as if someone was talking into the phone’s mic directly. This actually works! Don’t worry if you notice mistakes in the transcription, you can fix them later. Once the recording and subsequently the transcription is finished, long-tap on any word, choose “Select transcription” and then “Copy”. You have now copied the whole transcription to the clipboard and can paste it anywhere you like: eMail, Google Docs etc. That’s also where you are now able to correct any mistakes that Live Transcribe has made (within Live Transcribe, there’s no option for editing the transcription yet). Two more things: You can have Live Transcribe save your transcripts for three days (activate it in the settings or activate auto-save under “More settings”) and if you want to clear out the app’s transcription cache, you can also do this under “More settings”, then choose “Delete history”.

Can you do the same with video recordings?

What about video recordings? Could you have them transcribed via Live Transcribe as well? Basically yes, but it’s not quite as easy. That’s if you want to do it using only one device (it’s very easy if you use a second device for playback). When you leave an app that’s playing back a video, the video (and with it its audio) will stop playing so there’s nothing for Live Transcribe to listen to. You can work around this by using Android’s split-screen or multi-window feature to actively run more than one app at the same time. On Android 7 and 8 you are able to access split-screen apps by long-pressing the square icon (recent apps) in the bottom navigation bar and select the app(s) you want to run in split-screen mode. Things have changed with Android 9 however. For one, gesture navigation was introduced as an alternative to the “old” 3-button-navigation bar. So if you are using gesture navigation, you access recent apps by swiping up from the bottom and then hold. If you use the 3-button-navigation, long pressing the square icon doesn’t do anything anymore. Instead, just tap it once to access the recent apps view, tap on the app’s icon at the top of the window and you will get a pop-up menu. Depending on what Android phone you are using the menu will have slightly different items, or at least they are named differently: On my LG G8X I get “App info”, “Multi window”, “Pop-up window” and “Pin app”, on my Pixel 3 I get “App info”, “Split screen”, “Freeform” and “Pause app”. The items you will want to choose to run two apps side by side are “Multi window” (G8X) / “Split screen” (Pixel 3) which will split the screen in half or “Pop-up window” (G8X) / “Freeform” (Pixel 3) which will display the app(s) in a small, desktop-like window that you can move around freely. By doing this, you can playback a video clip and have Live Transcribe running at the same time. Of course you can also use this feature to have both Live Transcribe and the playback of an audio recording app on the same screen simultaneously but for audio file transcriptions, you don’t have to go the extra mile.

Can I do this on an iPhone as well?

Google has a whole range of apps for iOS, but unfortunately, Live Transcribe isn’t among them – it’s currently Android-only. But hey, maybe you have an older Android phone in your drawer that you could put to good use again? That being said, there is the possibility that Google will eventually release an iOS version of Live Transcribe or Apple will come up with an app that does something similar. I also thought of another way, using a Google app that is already available for iOS: Google Translate. Yes, it’s meant for translation and not transcription but in the Android version, you can also find a “Transcribe” button. Initially, using this will only give you a transcription of the translated language but if you tap the cog wheel in the bottom left corner and choose “Show original text”, you will actually get a transcription of the original language which you can then copy and paste. When checking the iOS version of Translate though, I noticed that there is no “Transcribe” button. There is a “Voice” button (which in the Android version has been moved to the search bar) but this will only pick up a limited amount of input and is quite slow. There’s also no “Show original text” option. I suppose there might be a chance that Google will update its iOS version to match the Android version but there are no guarantees. The Android version of Google Photos has had a pretty impressive video stabilization feature for quite a while now, something that is still missing from the iOS version. It might be a purely strategic thing and Google wants to give certain features only to users of its own mobile operating system, but it might also be for technical reasons like that the core transcription engine is deeply rooted in the Android system and it’s just not possible to tap into this on iOS where Google is “just” a 3rd party app developer. Let’s see how things will turn out in the coming months.

If you have any questions or comments, leave them here or hit me up on the Twitter @smartfilming. Do also consider to subscribe to my Telegram Newsletter to get notified about new blog posts and receive the new “Ten Takeaways Telegram” monthly bullet point recap of what happened in the world of mobile video creation during the last four weeks.

One thought on “#33 Auto-transcribe all your audio for free with Live Transcribe!”