#16 Six months with the LG V30 – a dream come true for smartphone videographers?

A little more than six months ago I bid my LG V10 goodbye into retirement. The V10 was the first flagship smartphone I had purchased and I had done so for a very specific reason: LG had redefined what a stock/native camera app on a smartphone can offer in terms of pro video controls. While many other phone makers were including advanced manual controls for photography in their camera apps, video had been shamelessly ignored. With the introduction of the V-series in late 2015, LG offered avid smartphone videographers a feature pack in the native camera app that could otherwise only be found in dedicated 3rd party apps like FilmicPro. While LG’s smartphone sales can’t really compete with the ones from Samsung, Huawei and such, the V-series fortunately didn’t just vanish after the V10 but was succeeded by the V20, V30, V35 and V40 henceforth. As I don’t see the need to upgrade my phone on an annual basis, I went for the V30. It took over the useful dual rear cameras from the V20 and newly introduced features like LOG profile, Point Zoom and CineVideo. After spending six months with the V30, what is there to say about the device as a videography tool?

END_OF_DOCUMENT_TOKEN_TO_BE_REPLACED

#10 Important update on the subject of Camera2 API 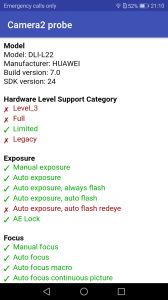 So some time ago I made a blog post about the topic of Camera2 API on Android devices and why it is important if you are interested in doing more advanced videography on your smartphone. If you don’t have a clue about what Camera2 API is, please check out my previous article before continuing to read this. One of the things that my previous article suggested was that you need a device with „Full“ or „Level 3“ Camera2 API support built into the Android OS by the manufacturer of the phone to take advantage of pro video recording apps. If your device has only „Legacy“ or „Limited“ Camera2 API support then you are not able to even install an app like Filmic Pro. However, after recently getting an Honor 6A into my hands, I need to differentiate and clarify some things.

END_OF_DOCUMENT_TOKEN_TO_BE_REPLACED

English preface to this post: Post #9 was supposed to be the 2nd part of the article about native camera apps but something came up so I’m squeezing another one in before delivering the sequel to #8. The reason is an event that’s happening today, February 23rd 2018, in Bochum, Germany: “MoJo Meeting” (Twitter: @MoJoMeeting), a (first time) gathering for the German/German-speaking “MoJo” community (“MoJo” = “Mobile Journalism”), hosted by the NRW Media Lab. While I’m unfortunately not able to participate in person, I have used this occasion to finally finish my extensive and fairly detailed Android app list for multimedia production that I had been working on for quite a while. A 15-page-pdf of the list will be downloadable from this post but the current list is in German. However I’m planning to make an English language version of this list available within the next few weeks.